Granting of land tenure in Medellin, Colombia’s informal settlements: Is legalization the best alternative in a landscape of violence?

Abstract
Colombia’s long history of internal violence has been characterized by the displacement of populations caused by the armed actors of the conflict. Colombia has one of the world's largest populations of internally displaced persons (IDPs) in the world, estimated to be as many as 4.3 million people (Yacoub 2009). These populations, the majority of which are rural, seek safe(r) locations in large urban centers like the cities of Bogota, Medellin and Cali (Lozano-Gracia et. al. 2010), where they become part of the growing population of slum dwellers. This situation of displaced people’s in cities has been complicated in Colombia by the fact that the national conflict has escalated and extended into these same urban areas where displaced people have built housing (informal settlements). Today a subgroup of this displaced population that has arrived to the city, had to migrate again from one area of the city to others out of fear of leaving their homes or selling them under pressure of these urban armed illegal actors. All of this has happened in the context of an ongoing land granting process by the state (Rojas 2010) that follows the logic that granting of land titles adds economic benefits both to the state and to the dwellers. This project has been developed at a national level and in Medellin for the last 15 years. This paper seeks to understand the challenges of policies that grant titles in informal settlements as a tool to deal with the growing problem of informality in Medellin, Colombia against the backdrop of a landscape of urban violence. It also suggests how communal grant title could be a tool that places these communities in a less dangerous position.
Background
The city of Medellin, Colombia, like many cities in Latin America, has seen a demographic explosion over the past six decades.  In Colombia, this accelerated growth has its roots in the forced migrations that started with the civil unrest of the early 1950’s know as “La Violencia”. This civil unrest has consequences until the present. This produced large migrations from the rural areas to the “safer” urban centers. These rural populations fled to the cities, often without any belongings or economical assets because they had to leave suddenly with no time to pack their things. They have encountered a city where the political system lacks the necessary legal and social legitimacy to control the national and local territory and an economical (industrial) sector unable to cope with the effects of globalization (Betancur 2004), thus diminishing job opportunities for those just arriving.
Those families and individuals just arriving from the countryside only find housing opportunities in the informal housing sector through a process of “invasions” (land grabbing). As a result of this process “nearly 2/3 of the population [of Medellin] currently lives in barrios that do not comply with the minimum standards and that lack the proper facilities” (Betancur 2007).
As a result of these national and local issues since the mid 1980s, Medellín has been an extraordinarily violent city, even within the context of Colombia. In the last wave of violence in Colombia between 1989 and 1994, (Betancur 2007), Medellín experienced 25 percent of all public order problems in the entire country.[1] In a country with a century-long history of violence and an internal civil war, Medellín has been the territory where those consequences were among the most visible.
The areas of informal settlements in the city are where the complexities of the national conflict, with its multiplicity of illegal armed actors (drug lords, guerrilla, Right Wing Paramilitary groups and organized criminal gangs), intersected. Historically each one of these illegal armed actors of the national conflict had positioned themselves in the major cities like Medellin and fought for control of the informal territories that are outside of control of the formal state.
Over the last two decades, the city of Medellin has implemented a series of projects that tries to deal with the problem of informality. The first project, implemented in the early 1990s, was the PRIMED (Integrated Slum Upgrading Program of Medellin or Programa Integral de Mejoramiento de Barrios Subnormales en Medellín). The second project, implemented in Medellin in 2004 to the present, was the Integral Urban Project (IUP) (Programa Urbano Integral). Both of those consecutive strategies focused on granting of land titles to informal settlers along with other polices and projects that intended to incorporate these “substandard” areas to the rest of the city. See Figure 1 for a map of all informal settlements’ of the city of Medellin and the ones that are considered for regularization. 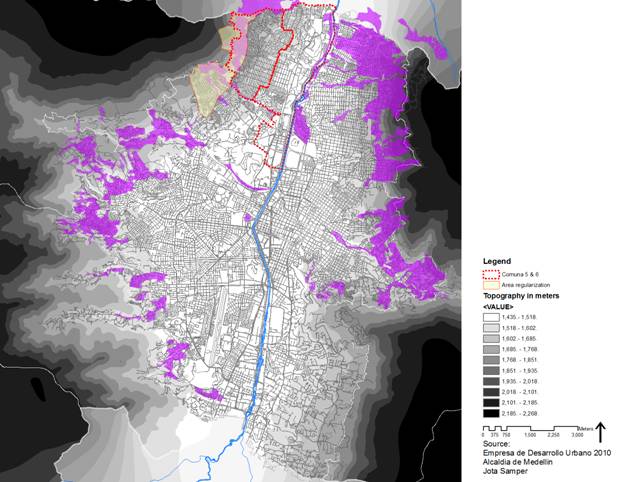 Figure 1 Medellin's informal settlements’: in purple are all informal settlements, in yellow there is a new area declared for regularization.
These projects that include the granting of titles in informal settlements of Medellin had been done in the midst of two national policies of pacification: (1) an increased increment in the use of military force toward illegal groups, funded by the US Plan Colombia that targeted left wing guerrillas and (2) the controversial (some authors will consider failed) peace process with the right wing Paramilitary group AUC (Autodefensas Unidas de Colombia). Both policies had occurred in rural and urban areas. The city of Medellin has been one of the cities in Colombia most impacted both by the actions of these groups and by the consequences of the failed peace process. Medellin, by 2007, had 13% of the total national demobilized personnel.
As a result of the complex and failed peace process with illegal armed actors in Medellin, the ex-militants of the paramilitary groups that once were part of the peace process had regrouped into a multiplicity of small gangs “Combos, Bandas and Oficinas” (Avendaño 2009).  These groups[2] had a larger presence in informal settlements. See Figure 2. This is a map that graphically shows how the previous paramilitary organization has fragmented into a multiplicity of illegal armed actors distributed over the territory of the Comunas 5 and 6. 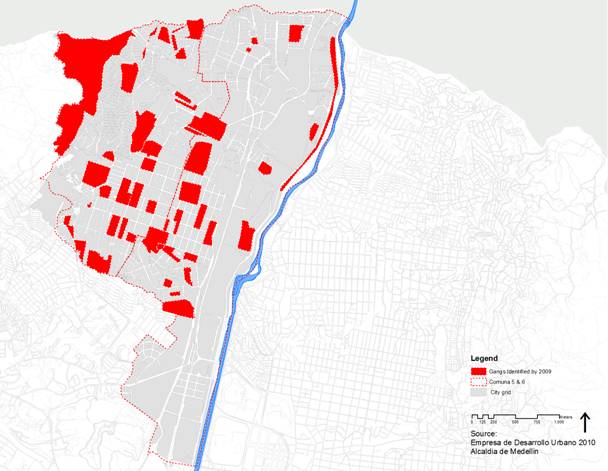 Figure 2 Comuna 5 and 6 Distribution of Illegal armed groups 2009: In red are the territories controlled by each one of the gangs (Combos or Bandas) that operated in 2009 in the Comunas 5 and 6.
Asset appropriation through fear
The military actions of the armed groups in Colombia and most commonly of the right wing paramilitary groups have coincided with attempts to acquire land, not only for the control of the security but to use land as an asset. Literature on the subject of illegal armed actors in Colombia displacing population as a tool of land grabbing concentrates on the effects of this phenomena in rural areas (Romero 2003 and Comisión Intereclesial de Justicia y Paz 2007), where the issue is clearer because farmers usually had some form of legal proof of tenure. By contrast, in informal settlements in urban areas the tenure of entire communities is a contested issue and the thus the phenomena is less documented.
In interviews conducted in January of 2010 in informal communities in Medellin (Samper 2010) revealed that some of the urban warfare tactics employed by paramilitary groups in Medellin include housing appropriation for the use of the asset as strategic location and the forced displacement and murder of individuals who threatened the illegal organization standing.
In Medellin, with a population of 2.636.101,[3] the total number of officially displaced people by the armed conflict by 2010 is 178,486,[4] 6% of the total city population. From that group, 13.541 are interurban displaceded,[5] (this number represents 20% of the national total of interurban populations).[6]  That final number is the official number of individuals being displaced by the tactics of these groups. The areas of operation of illegal armed groups in Medellin are usually informal settlements and these are the areas that now are selected by the local government as areas to grant legal tenure to their inhabitants.
Medellin, Colombia Legalization of Title
The Medellin regularization project dates back from 1994 and up to today many communities have benefited from the developments of the project. The project has gained recognition by some development agencies like the UN –Habitat Best Practices database as good practice. There is a large body of literature on the intrinsic benefits of granting tenure and the way that that the title regularization project creates economical benefits for both the household and for the state:
Results indicate that the value of a dwelling with a legal title is, on average, 37 percent above that of a house without one (approximately US$700 per dwelling), amply justifying the financial cost of the titling process (approximately US$80). Additionally, there are financial benefits for the state coming from increased land tax yield (US$11 per year per property) and the value added tax on notary services (US$4 per house sold in the market)”. (Rojas 2010) 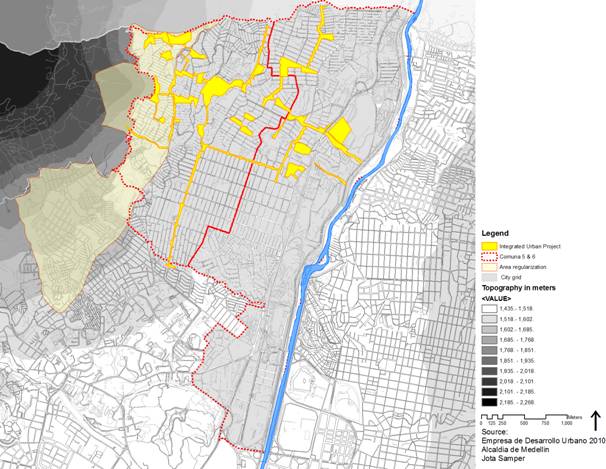 Figure 3 Project already approved PUI NorOccidental Source Alcaldia de Medellin, Empresa de Desarrolllo Urbano. In light yellow is the area selected to grant titles.
Today the PUI Proyecto Urbano Integrado Noroccidental (urban integrated project nor-western) that focused its efforts in the Comunas 5,6 and 7 involve a  total of 9,242 homes as part of the legalization regularization and title program since 2004. From that, a total of 8,000 homes alone will be regularized during the 2008-2011 mayoral period.[7] The informal settlements selected for development are described in the “Proyectos Plan de Desarrollo. 2008-2011. -Proyecto Plan De. Regularización. Convenio 480002183 de 2007”
Question
Today these two situations (1) large presence of diverse number of illegal armed actors and (2) granting of titles as part of the plan of regularization intersect the same territory. This intersection and the way in which the regularization process has been conducted may be leading to unexpected and possibly undesirable outcomes given the influence of illegal armed actors. Specifically, in terms of how these illegal armed actors modify occupancy of those housing units to be regularized.
In 2002 after a military operation (Operacion Orion) in Medellin that sought to eliminate a stronghold of left wing urban guerrilla in the Comuna 13, (dhcolombia, 2007), a contingent of the right-wing paramilitary group (Cacique Nutibara) moved to the area. As part of their military strategy they targeted individuals (killed, expelled or intimidated) who allegedly had links with the previous regime. As part of a series of interviews that I conducted in January 2010 in the Comuna 13, a member of the community narrated that along with this process of displacement of population, this organization also evicted families housed in strategically located units. Today the illegal armed groups that operate in the Comunas 5 and 6 are the factions of the “demobilized” right wing paramilitary groups that continue the same extortion and drug-trafficking practices. So it is expected that those same tactics applied for this territory. 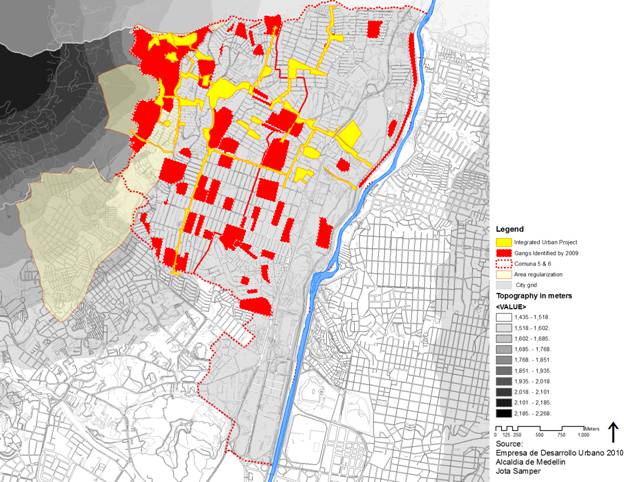