ABSTRACT
Scholars have vastly explored incremental growth of informal settlements as one of their defining features. Most of this work has focused on the family unit scale, concentrating on housing asset growth as related to the family historical narrative, legal status, social image, and financing. However, little has been explored about how this relates to the neighborhood scale and, more importantly, how the type of density growth impacts urban form, governance structures, and community social ties, which are essential elements for the development of resilient communities. Using semistructured interviews and historical mappings of informal settlements in Medellin, Colombia from the past four decades, this research maps the relationship between the urban growth of informal settlements and their impact on social networks. This research presents urban informality growth as following predictable patterns. It demonstrates that the exponential density growth found in these settlements, as they moved through the distinct phases of the predictive model, played a significant role in the fragmentation of social ties and co-optation by non-state Armed Actors, what I call eroded resilience. This finding raises important questions about the role of exponential density growth in connection with existing governance structures, not only in the context of urban informality but also in the context of global population growth. 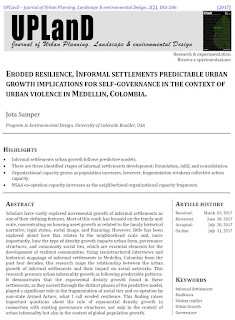