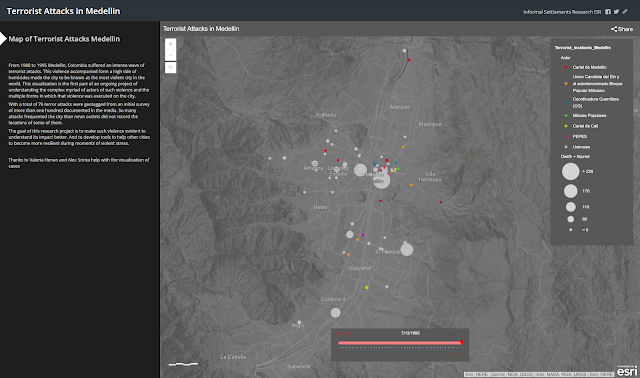 From 1988 to 1995 Medellin, Colombia suffered an intense wave of terrorist attacks. This violence accompanied form a high tide of homicides made the city to be known as the most violent city in the world. This visualization is the first part of an ongoing project of understanding the complex myriad of actors of such violence and the multiple forms in which that violence was executed on the city.

With a total of 76 terror attacks were geotagged from an initial survey of more than one hundred documented in the media. So many attacks frequented the city than news outlets did not record the locations of some of them.

The goal of this research project is to make such violence evident to understand its impact better. And to develop tools to help other cities to become more resilient during moments of violent stress.

Thanks to Valeria Henao and Alex Scinta help with the visualization of cases
Email Post
Labels: Terrorist Attacks in Medellin1988 to 1995.
Location: Medellin, Antioquia, Colombia