The Transformation of Medellín: Environmental Remediation and Community Development Is Having a Huge Impact on the Informal Settlements of Medellin in Colombia 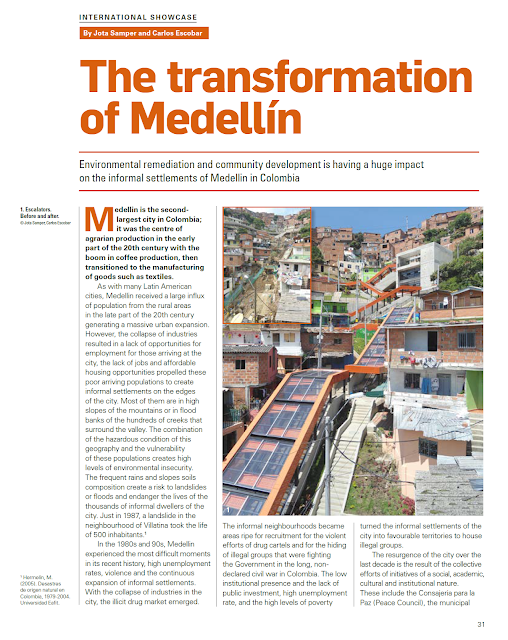 Samper, Jota, and Escobar Carlos. "The Transformation of Medellín: Environmental Remediation and Community Development Is Having a Huge Impact on the Informal Settlements of Medellin in Colombia." Landscape Journal, Bringing nature into the city, Summer, no. 3 (2020): 31–33.

Medellin is the second largest city in Colombia; it was the centre of agrarian production in the early part of the 20th century with the boom in coffee production, then transitioned to the manufacturing of goods such as textiles. As with many Latin American cities, Medellin received a large influx of population from the rural areas in the late part of the 20th century generating a massive urban expansion. However, the collapse of industries resulted in a lack of opportunities for employment for those arriving at the city, the lack of jobs and affordable housing opportunities propelled these poor arriving populations to create informal settlements on the edges of the city. Most of them are in high slopes of the mountains or in flood banks of the hundreds of creeks that surround the valley. The combination of the hazardous condition of this geography and the vulnerability of these populations creates high levels of environmental insecurity. The frequent rains and slopes soils composition create a risk to landslides or floods and endanger the lives of the thousands of informal dwellers of the city. Just in 1987, a landslide in the neighbourhood of Villatina took the life of 500 inhabitants.
https://issuu.com/landscape-institute/docs/landscape-journal-2020-3-12200/s/10718366
Email Post