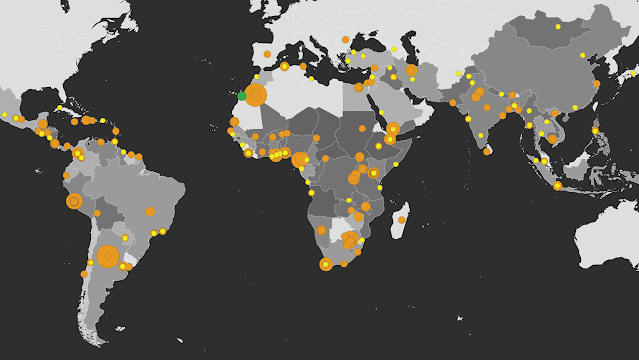 Informal settlements are the most common form of urbanization on the planet, accounting for one-third of the total urban form. It is expected that by the mid twenty-first century, up to three billion people will live in informal urban environments. However, we lack a consistent mapping method to pinpoint where that informality is located or how it expands. This paper presents the findings from a collection of standardized measurements of 260 informal settlements across the world. The main research goal is to identify a standard global sample of informal neighborhoods. It then focuses on mapping urban growth with remote sensing and direct mapping tools. The third stage classifies settlements based on how adjacency features such as development, topography, or bodies of water relate to their growth. The survey of growth corroborates the idea of informality as expanding geography, although at different rates than previously cited in the literature. We found peri-urban location to be a suitable estimator of informal settlement growth. This finding validates the comparison of multiple settlements to understand rates of change of urban informality worldwide. The findings here are vital to resolve important questions about the role of informal urban development in the context of accelerated global population growth. View Full-Text

Samper, J.; Shelby, J.A.; Behary, D. The Paradox of Informal Settlements Revealed in an ATLAS of Informality: Findings from Mapping Growth in the Most Common Yet Unmapped Forms of Urbanization. Sustainability 2020, 12, 9510.